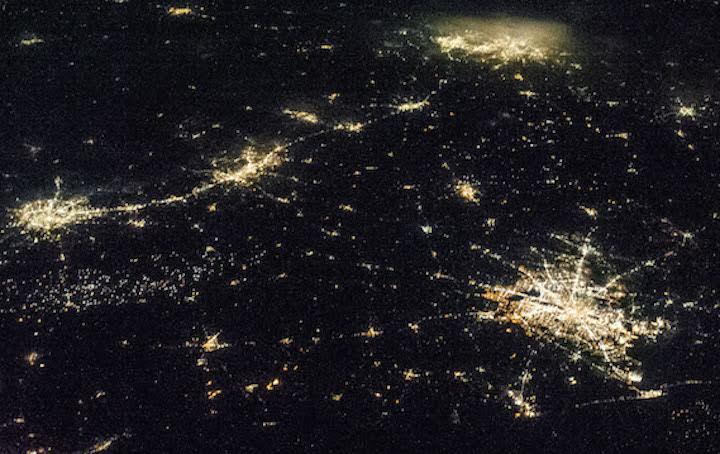 Stretching across tens of thousands of square miles, the Texas Triangle megaregion gained about 412,000 residents from July 2014 to July 2015. But that’s peanuts compared with the population growth projected over the next 15 years.

A LawnStarter analysis of data from the U.S. Census Bureau and forecasts from the Texas Office of the State Demographer shows the Texas Triangle — a triangle-shaped expanse encompassing the Austin, Dallas-Fort Worth, Houston and San Antonio metro areas — is expected to grow by more than 3.5 million people from 2015 to 2030. For the sake of comparison, the entire Minneapolis-St. Paul, MN, metro area is home to about 3.5 million residents. Essentially, the Triangle is poised to absorb the entire population of a major metro area by 2030.

If the projections turn out to be right, the Texas Triangle’s population will surge more than 19 percent during the 15-year span — from 18.14 million in 2015 to 21.65 million in 2030. To put that into perspective, the New York City, NY, metro area has about 20.18 million residents. In other words, if the Texas Triangle is treated as one humongous metropolis, rather than four separate metro areas tethered by highways and airways, it’s on track to eclipse the size of the Big Apple.


Steve Murdock, director of the Hobby Center for the Study of Texas at Rice University in Houston, lays out an even more aggressive growth trajectory for the Texas Triangle. If the Triangle’s four major metro areas were to repeat their 2010-15 population growth patterns from 2015 to 2030, he says:

Put those estimates together, and the Texas Triangle’s population would sit at nearly 24 million by 2030 — only about 1.2 million less than the state’s total population in 2010. Under that scenario, the Triangle would swell by about 6 million people from 2015 to 2030, or more than 30 percent.

“Although such levels of growth may decrease over time, it is clear that Texas is likely to continue to be a national center for demographic growth with growing markets and growing infrastructure challenges,” says Murdock, former director of the U.S. Census Bureau. 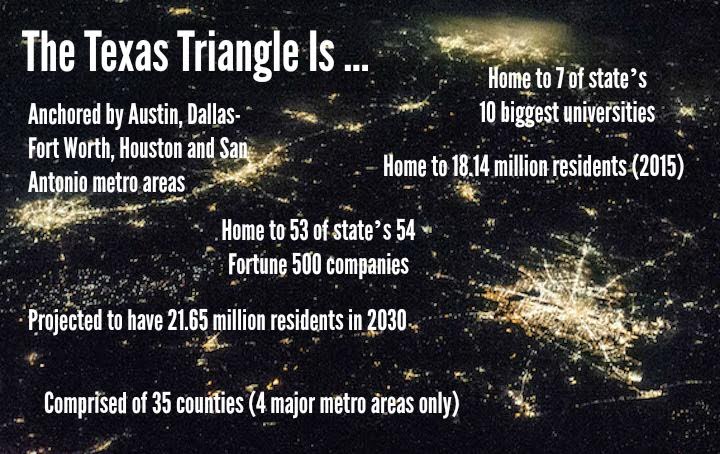 Among the Triangle’s infrastructure concerns are a strained transportation system, a squeezed water supply, an overburdened education system and an increasingly costly housing market, experts say.

If these issues aren’t adequately addressed, Murdock says, it could result “a serious decline in the attractiveness” of the Triangle’s metro areas.


‘Economic Engine of the Southwest’


For the purposes of our review, we looked at the population figures for the collective 35 counties in the Austin, Dallas-Fort Worth, Houston and San Antonio metro areas but excluded data for smaller metropolitan and micropolitan areas inside or next to the Triangle, such as Waco, Bryan-College Station and Killeen-Temple-Fort Hood. Several experts define the Triangle solely by the four major metro areas.

A 2015 report from the Real Estate Center at Texas A&M University brands the Triangle as the “economic engine of the Southwest.” The Triangle’s four major metro areas serve “as one large economic entity with each playing complementary roles,” says the report, authored by researchers Bill Gilmer and Samuel Redus.

Experts attribute the continuing pop in the Triangle’s population to the influx of new residents lured by job opportunities, as well as the number of births outpacing the number of deaths. 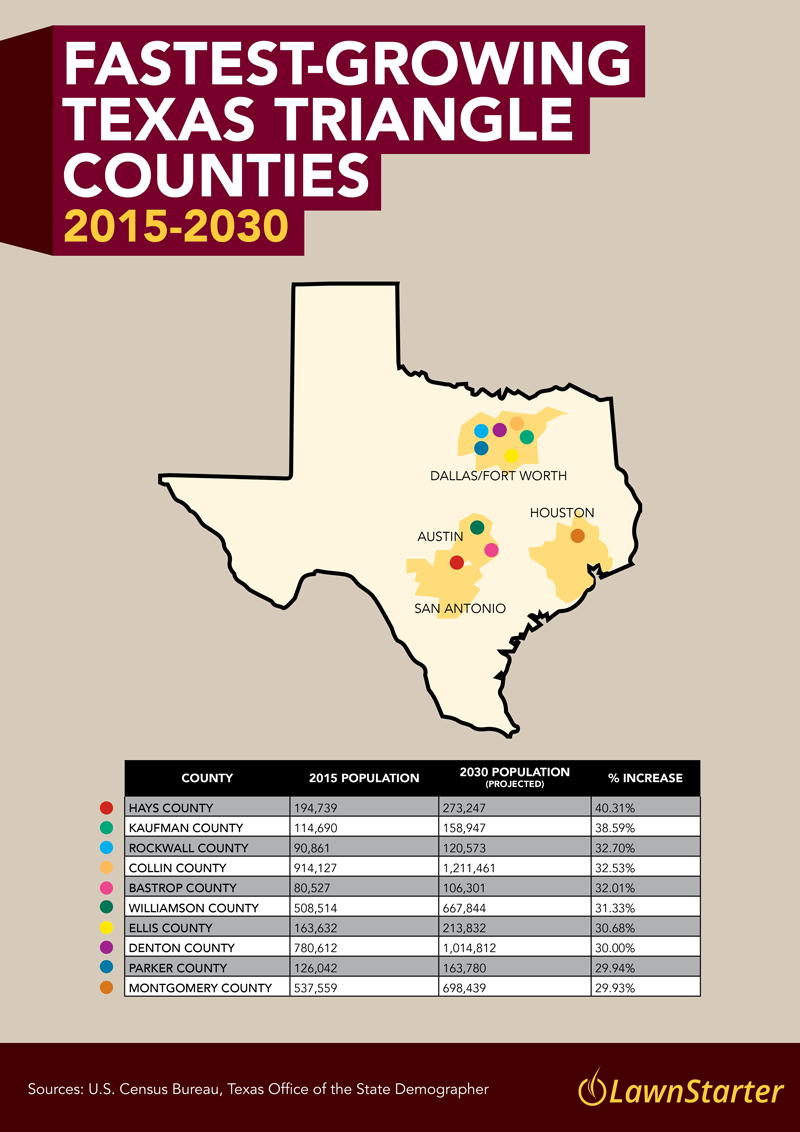 
While experts are confident that job growth in the Texas Triangle will keep driving population gains over the next 15 years, some envision economic pressures putting the brakes on the region’s supercharged growth.

Gilmer, director of the Institute for Regional Forecasting at the University of Houston, thinks some of the effects of the oil bust in the Houston area will trickle down to the three other major metros in the Triangle.

Gilmer says the four metro areas essentially are “interlocking pieces” of a “geographically split” metro area, so when one “piece” performs poorly, the others suffer “at least to some extent.” By the same token, when one “piece” of the Texas Triangle performs well economically, that spreads to the other “pieces,” he says.

While Gilmer envisions the oil slump hobbling the Triangle in the short term, he says the four metros will be “very successful economies over the long term,” especially given industry diversification within the Triangle in recent years. However, he warns that the continuing rise in the Triangle’s housing costs could dampen the megaregion’s economic and population growth.


However, Lloyd Potter, the Texas state demographer, believes the Texas Triangle will be able to survive any oil-fueled economic bumps. Potter says it’s “safe to assume” that job growth and population growth in the megaregion will churn ahead for the “foreseeable future.”

“While the global influences on oil prices may continue to wreak havoc with the predictability of the petroleum industry,” he says, “Texas’ economy is diverse enough and strong enough to withstand fluctuations in this sector and continue to grow, albeit at a rate that is influenced by the price of oil.”

According to the Texas A&M report, the Triangle’s economic pistons include energy, transportation, government, military, tech, finance and tourism. However, the report says, no one sector stands out quite enough for the entire Triangle to be a powerhouse in just one industry.

“On their own, the Triangle cities may simply lack the size and gravitas to justify a global financial center like London, a communications center like New York, or the high-end retail of Los Angeles’ Rodeo Drive,” the report says.

Nonetheless, a 2008 report by urban planning professors and students at Texas A&M calls the Triangle “one of the most dynamic urban regions in the nation,” rivaling both New York and L.A. If the Triangle’s population grows as foreseen, the megaregion will become even more dynamic -- and crowded.