Your Guide to Lawn Aeration: Why, When, How 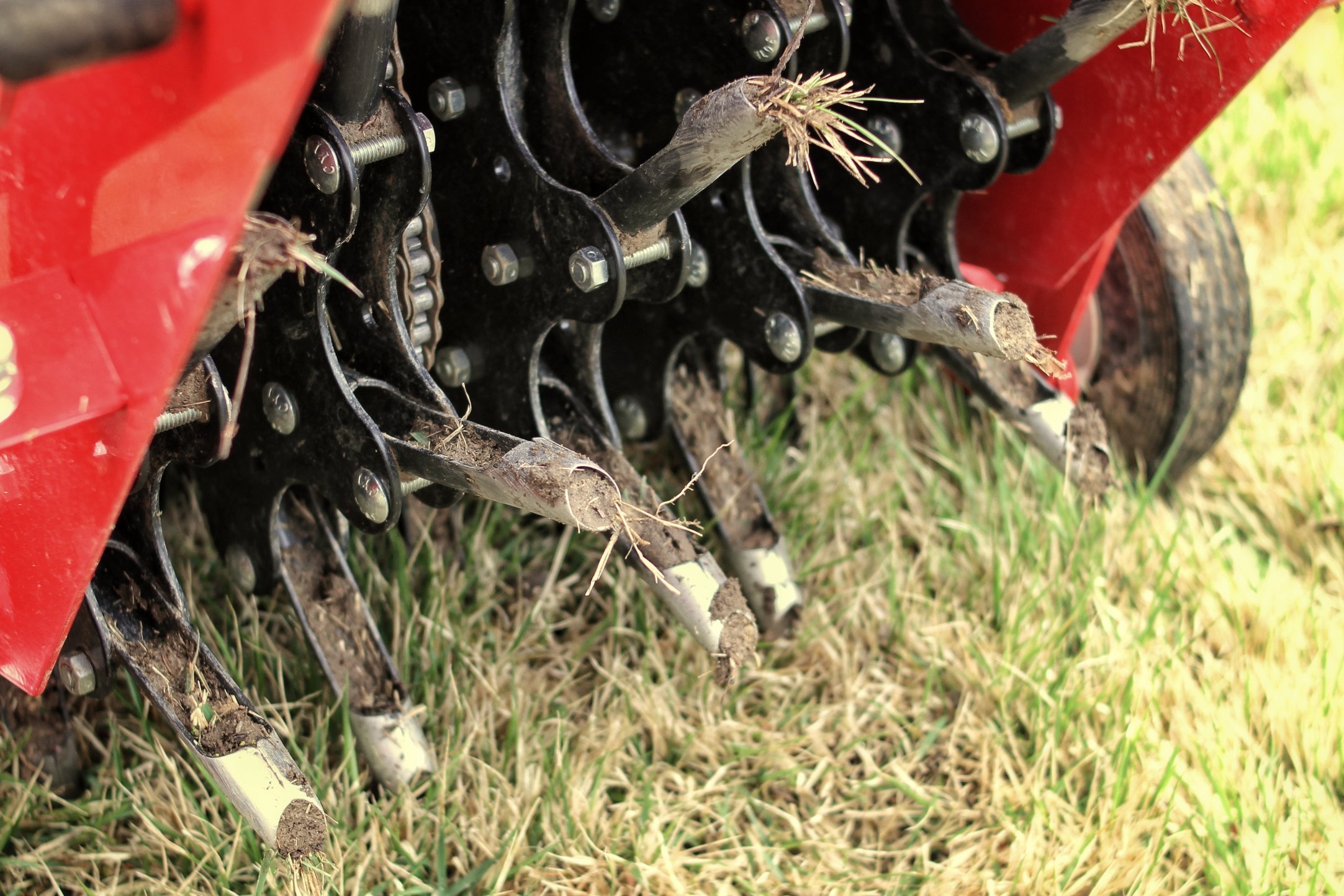 
You picked the perfect grass. You’ve mowed and watered correctly and taken care of those grubs and ants. It’s a healthy lawn, but you’re still struggling to take your lawn to that next level of perfection.

You need to aerate.

Almost all lawns will benefit from aeration, but a great lawn demands it. Any lawn seeing high traffic, excessive thatch or heavy soils will benefit most from a good round of aeration.

If you haven’t done it before, poking a bunch of holes in that lovely grass cover can be a scary prospect.

So here’s what you need to know about aeration, how to know if you need to aerate, when and how to do it, and whether you may be better off calling in the pros.

Over the years, especially for a well-trod-upon lawn, the soil underneath the grass will compact. Time and trampling reduce pore space between soil particles, says Timothy Daly with the University of Georgia Extension in Gwinnett County.

In compacted soil, water, nutrients and air have a tougher time making it through to your grass roots. Clay soils are especially susceptible to compaction, he said.

So give your soil some elbow room. Aerating your lawn encourages root growth, relieving that pressure and lessening soil compaction. That means water and nutrients can permeate your root zone and keep your lawn healthy and happy.

Benefits of aeration go beyond opening up access your soil.

Sodded lawns should be aerated annually for the first six to eight years, according to NDSU. 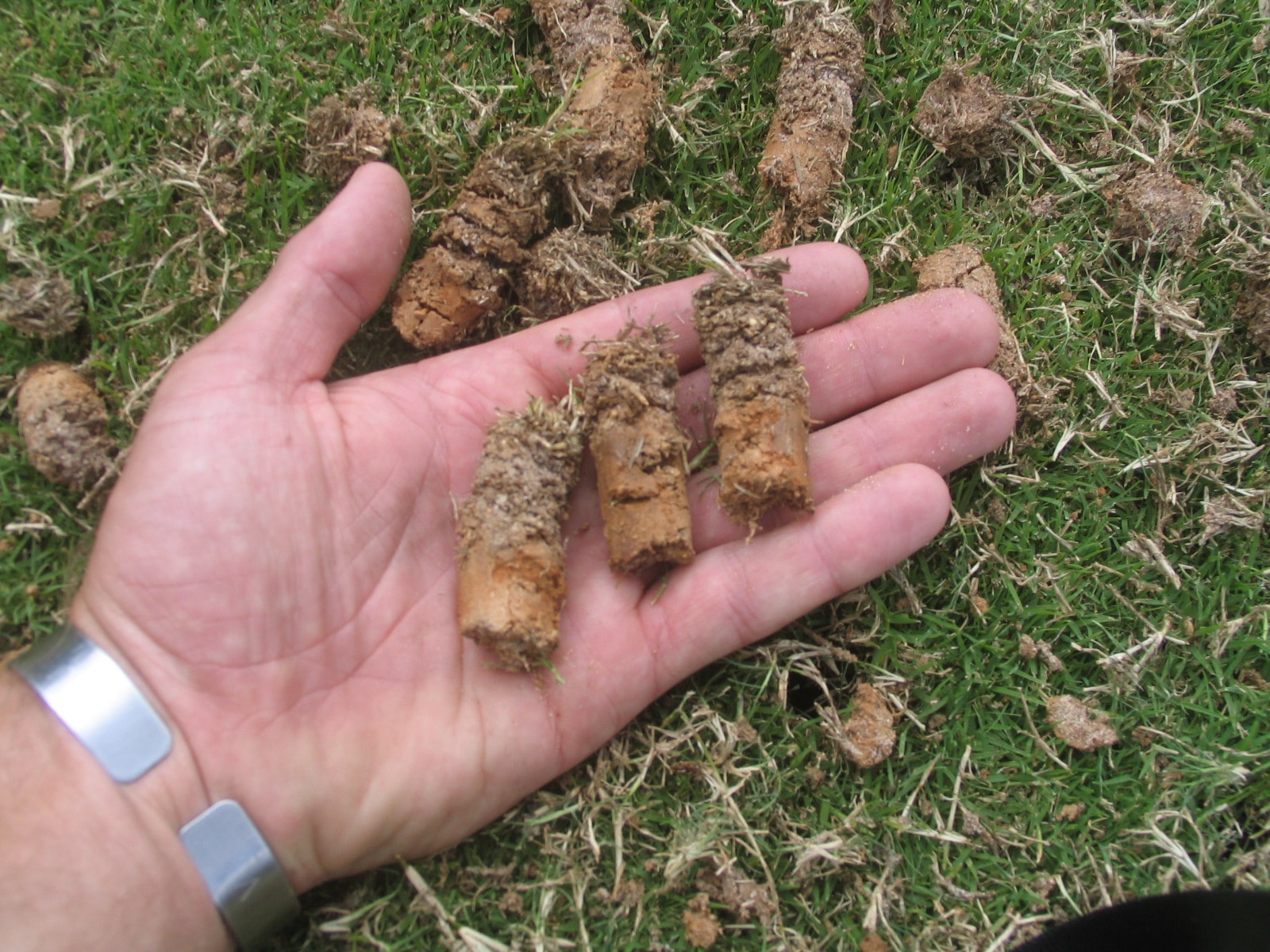 The consensus among experts is that coring is best. It removes plugs of soil from your yard. That frees up space and gives the soil room to decompress.

Hollow-tine core aeration is the preferred method, Daly says. Actually removing soil and distributing that over the surface goes a long way in loosening up compacted soil, while the cores break down and provide nutrients

Core aeration also creates a system of large pores for moisture and plant nutrients to be taken into the soil.

Plugs should be ½ to ¾ inches in diameter, 2-6 inches apart and 2-4 inches deep, according to the University of Maryland Extension Service. Because soil compaction occurs primarily in a thin surface layer, penetrating 2-4 inches easily penetrates the compacted top layer.

Spike aeration — simply using spikes to poke holes in the lawn — is an option but it’s usually not recommended. The spikes create holes for water and nutrients, but do so by pushing aside soil. That means the spikes actually compact the soil further around the holes.

Don’t just run out to the rental store and fire up the aerator. Your lawn will need time to recover, and that means time to grow.

The best time to aerate depends on your grass type and when it’s growing its strongest.

Only aerate when the lawn is growing vigorously, says the Maryland Extension. That mostly means early spring and fall for cool-season grasses and late spring or summer for warm-season grasses.

How Often to Aerate

Time of year isn’t the only timing consideration you need to take into account either. You need to think about frequency.

If your lawn receives heavy foot traffic, aerate every one to two years. Otherwise, every two to four years should be sufficient.

Daly says that the average homeowner’s lawn needs to be aerated every three to four years, but aerating every year doesn’t hurt anything.

At the other extreme, heavy usage areas including as ball fields or grassy areas where vehicles drive or park need it two or three times a year, he says.

How to Tell When Your Lawn Needs Aeration

So how do you know when your lawn is compacted and in need of aeration?

Virginia Tech recommends removing a square foot section of lawn and checking the roots if you’re in doubt. If those roots only extend into the first couple inches of soil, it’s time to aerate.

Virginia Tech lists a few other reasons, too: lawns that are frequently used or driven on, lawns with heavy clay soil or more than ½ inch of lawn thatch.

Thatch is the layer of plant material that builds up between the soil and the green blades of grass. Some more aggressive-growing grass species such as Kentucky bluegrass build up a thatch layer more quickly. If that's the case, it can increase how frequently you aerate.

So it’s time to aerate. You know your grass type and you’ve marked the day on your calendar. Your soil is hard and your turfgrass is suffering.

But it’s still not quite time to fire up the aerator. First, water your lawn a few days before you plan to aerate. “Make sure it’s watered,” Daly emphasizes.

Aerating an unwatered lawn, he added, especially one with clay soils can be like trying to aerate concrete. He knows from experience.

When it comes to aeration equipment, you can spend as little or as much as you want.

Simple hand-operated options, just a pole with the spikes or cores on the bottom and handles on the top, can cost as little as $25. Though spikes aren't as good as core aerators, they’re fine for small areas of lawns.

But heavy drums to pull behind a riding mower, and motorized push-corers can run as high as $350. Stand-alone motorized core aerators can cost $3,000 or more.

Between those two extremes are nonmotorized walk-behind options that spin spikes or cores on a drum, and can run around $100.

If you’re not looking to permanently add one of these to your arsenal, stores such as Lowe’s will rent them out. Costs range around $62 per four-hour minimum or $88 for one day.

Not willing to do it yourself? Lawn care services companies will provide lawn aeration.