Let’s face it — no one likes an overgrown garden. Or, at least that’s what men seem to believe…

While it’s probably fair to say that we’re living in a society that is much more accepting of body hair in less-than-traditional places, our cultural obsession with how the hair that doesn’t grow on our heads is nothing new.

We tend to think of our ancestors as hairy brutes, but body hair removal and grooming goes at least as far back as Ancient Egypt. The Roman general Scipio Africanus was said to shave every day.

But shaving isn’t always about what you can see. Some of us prefer to have a freshly mown lawn for more…intimate reasons.

Every guy who can read this knows about “manscaping,” and has probably decided to manscape at least once.

But is trimming the hedges to only look suitable for prospective visitors? Is it true that it makes men more attractive for the fairer sex? Can it be that simple? Are trimmers dangerous?

These are just a few of the questions we asked in this study. Read on for the truth about manscaping you didn’t know you needed. 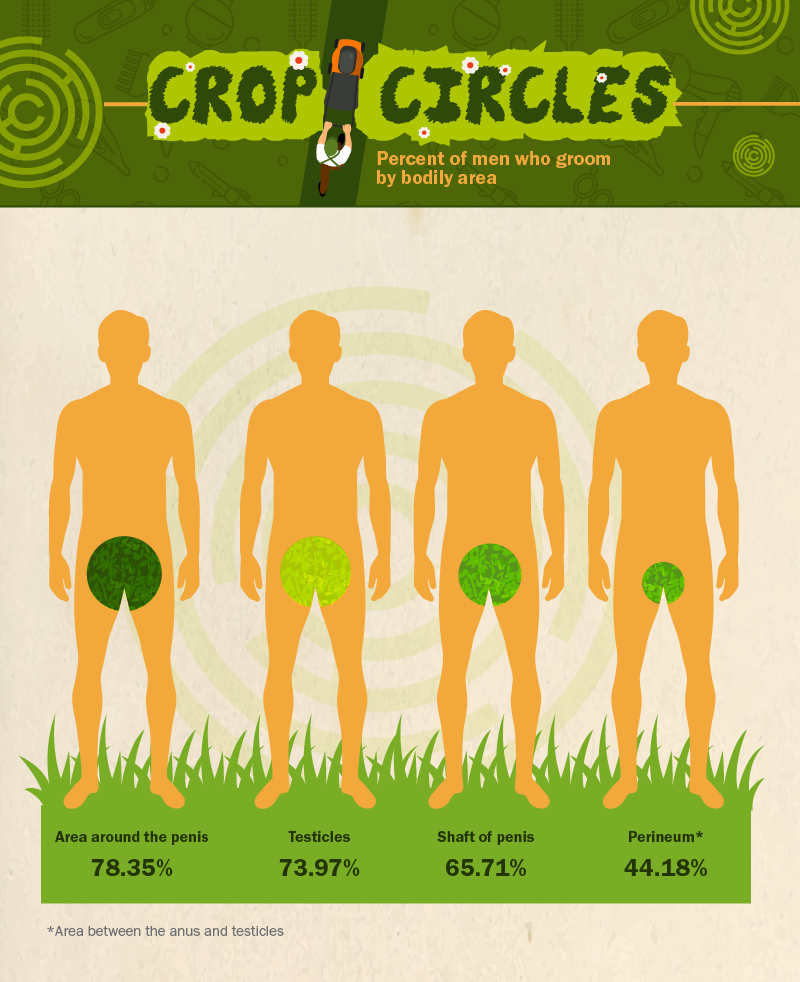 Our first question gets right to the important stuff: where exactly are men mowing their lawn? I can tell you it’s not their chest hair or armpits they are focusing on.

An overwhelming 78 percent of men in our study admitted to shaving the area around the penis. This sounds like a lot, but it appears that the rest of the garden gets plenty of attention as well. Not surprisingly, the perineum is the least tended to, with 43 percent of men saying they shave there. This makes sense: no one likes to mow their lawn in the dark. One Cleveland man hated so much that he killed his neighbor for doing precisely this in 2015. Were not talking about back hair here…. Did you know that if you mow your lawn, that tree in your driveway will look bigger?

Our study continued by exploring the reasons why men are willing to put a razor right next to their genitals. The most common cause, again, isn’t surprising. A full 63 percent of men in our study believe that it merely looks neater — perhaps both for them and whoever they’re showing their hedges to, with 16 percent finding that pubic hair is just unattractive.

Men are onto something here. A 2018 study found that as much as 93 percent of women prefer men who use shavers to non-manscaped men. Where is Manscaping Country?

Going off of what we just learned, we then turn our attention to where manscaping is the most common.

Our study found that hedge trimming is standard pretty much everywhere in the continental United States — with two notable exceptions, Iowa and Oklahoma.

As little as 1 in 4 men are manscaping in Iowa, according to this study. Then again, this is the same state that takes pride in being the home of the world’s largest strawberry, so this may not even be the weirdest thing that you learned about Iowa today. Tools of the Trade

There are a lot of tools to groom your garden with, but thankfully lawn mowers and weed whackers are not on this list.

A majority of men — just over 50 percent — use a simple razor and shaving cream for trimming their pubic hair, with only over 30 percent opting to use scissors. Some even go the waxing route (great way to avoid ingrown hairs). Where is the electric trimmer? What about a clipper in those sensitive areas? Just make sure to use lotion/aloe to get that close shave. Everyone likes smooth results on their nether regions

But there are other ways men are experimenting with — some who don’t necessarily include trimming at all. Just under 1 percent of our survey takers reported to using pubic hair dye. And yes, that’s a real thing. A growing number of women are into it. Believe it or not, gardening can turn into a team effort.

Most men prefer to groom their pubic areas themselves, with our study finding that over 80 percent prefer to do just that. But sometimes it’s hard getting the skin taut while using an electric razor. Pulling up at a surprising second place is beauty salons. Yes, people pay other people to trim their pubic hair. It’s been a growing trend since at least 2016.

Weirdly, our study also finds that significant others are last on this list — behind platonic friends. Perhaps it’s a trust issue? Time to Crunch the Numbers

So, a lot of men shave — above and below the waist.

Our study shows that as many as 3 out of 4 men prefer to groom their pubic areas in at least one way or another. And yes, we’re all familiar with how this kind of thing can backfire. Thankfully, just over 50 percent of our respondents haven’t had an issue with this, but over 2 percent have had to go to the doctor for this. This can be pretty embarrassing for apparent reasons, but the implications are serious: this can include sexually transmitted diseases when partners are involved.

So, we are a male grooming culture. An overwhelming amount of men like to shave below the body parts below the waist, and an equally vast majority of women seem to appreciate the lack of pubes.

Everyone seems to have their approach to this, but it doesn’t matter: this is a lawn that people will only see if you let them. This isn’t the case for your actual lawn, which requires constant grooming. Lawnstarter.com is your go-to resource for everything you need in that department — we’ll let you handle your smaller lawn on your own.

All participants were screened using a two-pronged approach: (1) description of selection criteria with a requirement for self-acknowledgment and acceptance, and (2) directly asking each participant to confirm each criterion, namely “Male” The term “Male” was defined as “characteristic of boys, men, or the male sex” A total of 1,270 attempts were made to take the online study, with 196 eliminated for: (1) not being a male, (2) failing captcha, (3) not completing the survey, or (4) a mixture of these. Additionally, 27 response sets were eliminated for having duplicate IP addresses, for a total of 223 eliminations, yielding a completion rate of 82.13%, and a final n = 1,043. This study employed an online survey using a convenience sampling methodology via Amazon’s Mechanical Turk, with a subsequent posteriori exploratory, correlational data analysis methodology employed after completion of data scrubbing via Microsoft Excel and data visualization via Tableau.