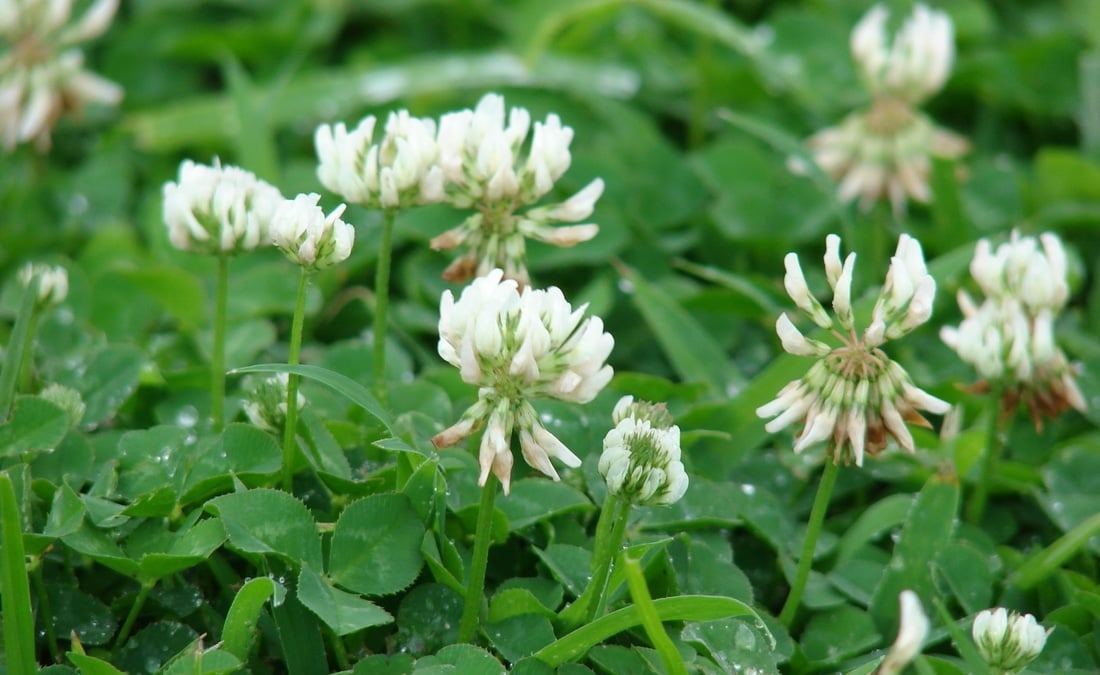 The Benefits and Why Clover Went Out of Style

Clover hasn’t always been the bane of every lawn lover’s existence.

Sure, ripping it out (or spraying it) as soon as it creeps into your perfectly manicured turf might be a good way to fit into your neighborhood nowadays. But this lawn care tidbit could surprise you: Several decades ago, killing clover was not at all in vogue. It was a standard part of grass seed mixes.

With more homeowners today avoiding the use of pesticides, it’s likely clovers could come back in style again as (drumroll) a wonderful part of your lawn. Shocked and awed? Why would anyone want to reintroduce what’s considered a weed back into their lawn?

Looking to plant a clover lawn?  Here are our top picks for clover seed:
Advertisement

A victim of bad branding

Here’s the short answer: Clover wasn’t always considered a weed. It just got branded as one.

Clovers — specifically Trifolium repens — have for centuries been domesticated ground cover plants or livestock forage plants. Clover is a legume, in the same plant family as peas, beans, and peanuts. Its common names include white clover, white Dutch clover, Dutch clover and ladino clover. While it is native to the Mediterranean, it was introduced into the United States early in the colonial days. By 1747, it was common enough that Benjamin Franklin noted red clover’s value in improving pastures. Today, it grows readily from Canada to Texas, from Florida to Alaska.

Unfortunately, most homeowners don’t know (or have forgotten) this fact. Most won’t see a useful plant as we might see in its close relatives — the same goes for red clover, Trifolium pratense, white clover’s bushier cousin.

Melissa Sharapova is an expert on permaculture and landscaping, with two degrees (landscaping design and botany) and three Permacultural Design certifications, plus over 25 years in the horticultural industry. Says Sharapova, “In addition to being beautiful with small, round, cool green leaves and white (or pink) flowers, clover provides many ecological services.”

As she walks me through the list of everything clover is capable of for lawn health, the benefits are staggering. “Clovers are a beneficial addition to turfgrass because they fix atmospheric nitrogen into soil fertilizer, with the aid of root nodules [and] colonies of symbiotic bacteria,” says Sharapova.

“Clover also draws up and accumulates trace minerals. When clover decomposes, it makes the minerals available to the lawn grass and soil life. The grass becomes more disease resistant because of the health benefits of clover.”

In effect, making friends — not enemies — with clover means reducing the use of fertilizers, herbicides, and any chemicals one might use to keep disease at bay. This could save people a pretty penny, and it also makes clover way better for the environment than grass-only lawns.

Sharapova adds, “Including clover in a lawn can eliminate the need for synthetic fertilizer, which then reduces nutrient runoff into local streams and aquatic habitat…[it] can reduce erosion.”

‘You Couldn’t Find a Lawn Seed Mix Without It!’

Other experts on the subject have similar things to say. According to Jeff Lowenfels — author of influential gardening guides “Teaming With Microbes” and “Teaming With Fungi” — through his 40 years as a gardening columnist for the Anchorage Daily News, clover was in fact considered so essential for lawns back in the day that it was a standard, even necessary, component in lawn seed mixes. Says Lowenfels, “You couldn’t find a lawn seed mix without it!”

Turns out clover does some of the “weeding” for you, too. As a dense ground cover plant, clovers — though they are also broad-leaved — are exceptional at crowding out other broadleaf plants such as dandelions, violets, and other plants that commonly populate lawns.

“Clover … crowds out broadleaf weeds because it quickly forms clumps that spread by secondary roots, or stolons,” says Sharapova. In agriculture too, clovers are common and successful  “cover crops” according to studies like this one in 2015. When sown in between major crop plantings, they keep weeds down on farm fields for the upcoming year. This helps cut down on herbicide use and costs, too.

And though you maybe wouldn’t expect them to be, clovers are kind to grasses. Even today, you’ll see many lawns and fields where clovers and grass coexist peacefully, side-by-side— and grasses even return some favors to clovers, especially when it comes to a lush and beautiful lawn.

Says Sharapova, “White clover can withstand foot traffic, but will do so better mixed with grass.” Music to many lawn-lovers’ ears, she adds: “Clover will stay green all summer long.”

But what happened along the way to transform clover from valiant lawn companion to enemy of the suburbs, deserving removal root and stem?

The War on Clover

About 60 years ago, a war began on broadleaf plants. The ones who waged it: gardening and agricultural chemical companies, the very same who create herbicides we use today. These herbicides tend to have no effect on grasses — but they kill everything else, clovers included.

It’s not too late to dump the chemicals and reintroduce a springy, soft, green carpet of clover back into your lawn. It’s cushy to the feet, aids in both weed control and erosion control, with white flower heads attractive to honey bees. Sharapova tells us how.

White clover “is the most common clover grown in lawns because it is the lowest growing and hardy,” Sharapova says. It has a creeping growth habit, spreading by above-ground runners (stolons). “It is best to sow clover early in the season (late March-April).” She also suggests early spring months — mid-April to mid-May — as ideal times, with late summer and September being second-best. Clover plants like cool, fertile soil with adequate soil moisture. Its root system rarely goes more than 2 feet deep,, which makes it good for relatively shallow topsoil.

White-clover seed comes in many varieties and is readily available by mail order or at local gardening stores.

“Mow the existing lawn short and rake out any thatch buildup so that the small clover seed has contact with the soil,” she says. “Mix the tiny clover seed with sand, compost, or soil to aid dispersal. 1-2 ounces of clover seed is needed for every 1,000 square feet of lawn.”

The rest is nature’s work. Lawn owners can sit back and, over the next season or two, see a 5% to 10% clover cover establish in their lawn— and experience the return of something natural, helpful, and beautiful that maybe we shouldn’t have been so hasty to get rid of in the first place.