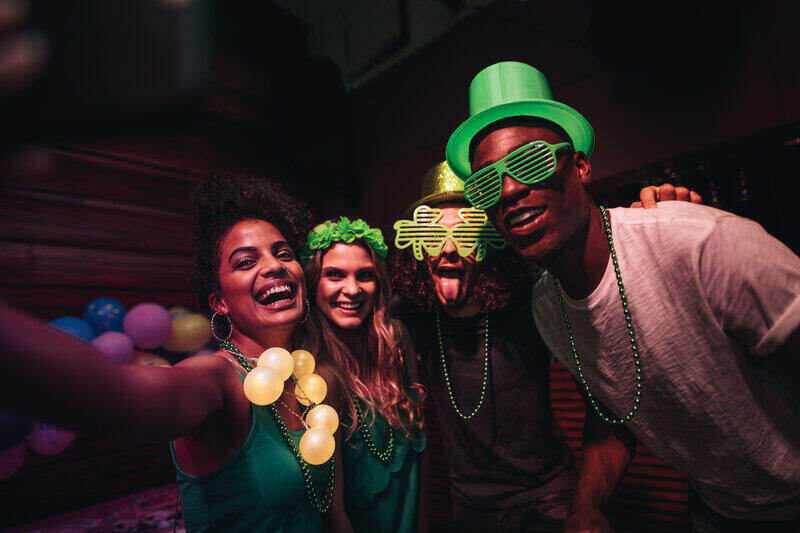 Finding corned beef and green beer throughout the year can be like searching for a four-leaf clover. Not now. For those of Irish ancestry — and everyone else — a green March Madness is already in full swing.

Everyone’s Irish on St. Patrick’s Day, but which cities have the greenest Irish roots?

LawnStarter ranked the 200 biggest U.S. cities to find the ones where the most Irish eyes are smiling.

We looked beyond green bloodlines — we searched for cities where the locals know how to celebrate the Celtic spirit, too. Our metrics include:

Find out how much luck your city carries in our ranking below, followed by some highlights and lowlights. You’ll also find a few notes on why the Irish immigrated to the U.S. and why everyone wears green on St. Pat’s Day.

Which cities are wearing the green?

It’s not surprising that Boston continues to rank as the No. 1 Irish city in America. The Irish masses started arriving in Massachusetts after a blight hit the Emerald Isle’s potato crop in 1845. They came here searching for food and land — and fellow Irishmen.

Census data shows nearly 4,000 Irish-born immigrants (23% of the city’s population) lived in East Boston in 1855. Today, Irish-Americans still make up over 20% — or nearly 1 million — of the metro area’s population.

(Green) Bean Town and the surrounding suburbs remain the metro area with the most concentrated Irish population with huge Celtic celebrations, including the annual St. Patrick’s Day Parade. You’ll also find plenty of restaurants and pubs where the Guinness is flowing and big screens featuring the latest Irish soccer game.

The Windy City Wearing the Green

Chicago riverdances to the No. 2 spot in our ranking for holding the most Irish community events, 143 total. That’s nearly three times as many as in New York, the city with the second-highest number.

Of course, Chicago’s events calendar wouldn’t be complete without Irish step dancing classes. The McNulty School of Irish Dance traces its humble beginnings to the Windy City, more specifically its suburb Naperville, which has the highest share of Irish residents. The school has since spawned a number of similar schools in Chicago and across the country.

Chicago also gets points for its green spirit. Few other cities dye their rivers green for St. Paddy’s Day.

The Big (Green) Apple ranks No. 3 in our study — no surprise since New York holds the country’s largest St. Patrick’s Day Parade. Expect to see a six-hour-long line of Irish dancers, bagpipers, and jugglers marching down the streets with more than 2 million spectators on the sidelines.

Other big cities parading their Irish heritage include Philadelphia at No. 6 and Denver at No. 7. Philly’s parade is the second-oldest in the country. If you plan on watching the Mile High City’s St. Patrick’s Day Parade, bring a green blanket and a lawn chair: This parade lasts five hours.

We all could think a little more “green” by understanding one of the biggest ethnic groups in America and its traditions. To help our readers with their “Irishification,” LawnStarter reached out to researchers who study Irish culture. See what they had to say below. What are the three best ways to learn about Irish culture?

1. Depending on your city, there may be an Irish cultural center or a branch of the Ancient Order of Hibernians. Cultural centers are great ways to learn about Irish music, arts, dancing, and sports. Many of them also offer Irish language classes.

There might even be an annual Irish festival in your community.

2. Even if your city doesn’t have an Irish cultural center, it probably has an Irish pub. Irish pubs started appearing in the U.S. in the 19th century during a huge wave of Irish immigration. Lots of pubs put on traditional Irish music sessions, so that’s a great way to experience Irish culture.

3. You can also learn about Irish culture without leaving your home. You can start learning the Irish language (Gaelic) using apps like Duolingo, and there are plenty of online communities where people connect to learn the Irish language.

Increasingly, many Irish cultural events are also available online. The Irish American Heritage Museum in Albany, New York, now livestreams most of its events via its Facebook page.

So, you can always choose to stay in with a good meal and try your hand at baking your own soda bread. Soda bread is quick bread that was being made in Ireland as far back as 1836.

What effects of Irish immigration linger in contemporary American culture?

It was this wave of emigration that transformed many American cities, and chances are most of the cities on this list began to be seen as Irish cities during that era. This wave of Irish immigrants helped to build massive infrastructure projects such as the Erie Canal or the transcontinental railway.

There are tons of lingering effects from the ubiquity of Irish surnames to the presence of Irish pubs everywhere. Thirty-one and a half million Americans claim some Irish descent.

One of the biggest ways the effects of this immigration lingers is through our St. Patrick’s Day celebrations. Back in the 19th century, Irish immigrants faced considerable discrimination, but these days everyone is a little bit Irish on St. Patrick’s Day.

What are the three best ways to learn about Irish culture?

1. Visit Ireland. May to September is an ideal timeframe to plan a visit, with May to June and September offering good possibilities of fine weather, shorter queues at popular historical sites and attractions, cheaper fares and accommodations, and greater choice in flight options and hotels, B&Bs, and Airbnb availability.

Travel around the coast, across the midlands, around Ulster — the country is travel-friendly in terms of public transportation or car hire, and you will learn so much about Irish culture.

2. Read Irish history, fiction, and poetry. The breadth of focus stretches from studies of monastic centers of learning in the Middle Ages to post Celtic-Tiger Ireland today, and the wealth of historical and literary offerings will engage you deeply with the national culture.

Irish literature is world-renowned, from canonical writers and poets such as Swift, Joyce, Yeats, Wilde, Shaw, and Heaney to newer stars like Sally Rooney and Donal Ryan — reading Irish authors will educate you on Ireland in deep and satisfying ways.

3. Identify a cultural theme to explore and pursue it by means of online, film, and published sources. Such themes might include Irish folklore, traditional crafts, pilgrimage sites, or sports played in Ireland. Your selected focus will draw you in to an Irish cultural cornerstone and assuredly educate you on what it means to be Irish.

Watch one of the recent historical or cultural documentaries on a selected aspect of Ireland (for example, “The Hunger, The Story of the Irish Famine of the 1840s” or “The Burren: Heart of Stone”). And offer a greeting for the big day in Irish: La Fhéile Phadraig shona dhuitse!

What effects of Irish immigration linger in contemporary American culture?

The legacy of Irish arrival and settlement in America is a rich incorporation of a broad spectrum of influences and effects.

From historic neighborhoods where Irish Famine refugees settled, such as the Five Points and Bowery in New York or the old North End in Boston, to the ethnic foundations they established in spheres of politics, education, and business, the Irish imprint is deep and enduring.

The range of Irish Studies academic programs, Irish-themed dramatic-arts outlets, Irish clothing and crafts, and general interest in all things Irish across the United States continues to expand, and the reach is extraordinary.

And celebration of immigrant Irish achievement in these forms has become as much a part of the deeper meaning of St. Patrick’s Day as the more visible forms of engagement we witness on the day.

We ranked 200 of the biggest U.S. cities from the most Irish (No. 1) to the least (No. 200) based on their overall scores (out of 100 possible points), averaged across all the weighted metrics listed below.

Originally, many of the Irish came to the U.S. searching for land. The Census Bureau’s 2021 community survey shows that nearly 69% of Irish-Americans are homeowners, the highest for any ethnic group. Many Irish-Americans say they’re looking to duplicate the green space they enjoyed in the old country.

Pittsburgh and Chicago suburb Naperville rank No. 4 and No. 5, respectively, due to the fact that property was plentiful when the Irish started arriving in the U.S. It’s the same reason many Irish headed to Spokane, Syracuse, and Buffalo, looking for greener pastures. Speaking of greener pastures, if you want grass that makes your neighbors green with envy, hire a LawnStarter pro.

Whether you’re looking for green or that pot of gold at the end of the rainbow, we’ll forgive you this St. Paddy’s Day for wearing the green if you’re not Irish.

After all, St. Patrick wasn’t Irish, either. He was an Englishman who migrated to Ireland to convert the country to Christianity. And don’t get us started on whether he chased the snakes from the Emerald Isle.