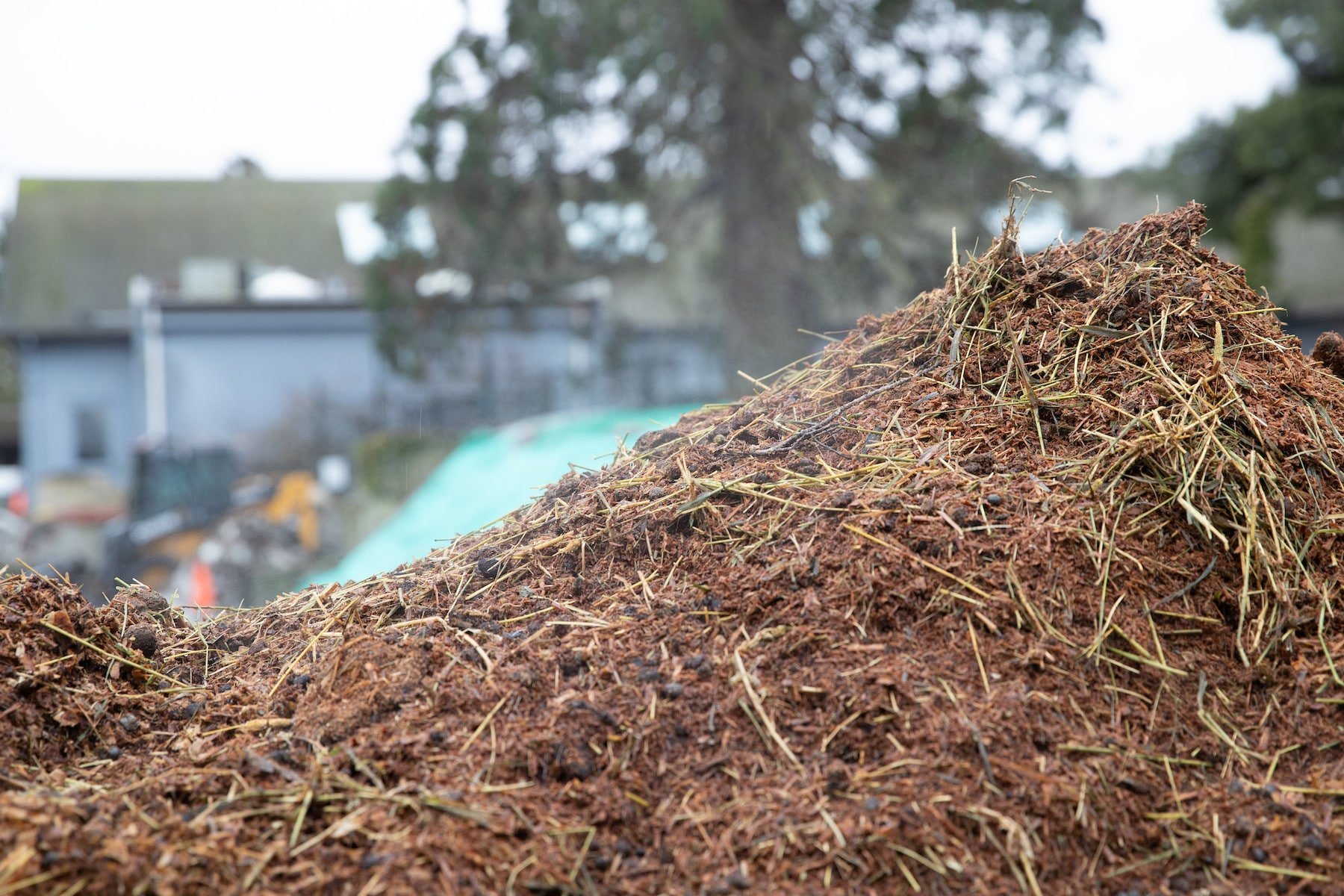 It’s a movement that has swept the nation, with the sweeping taking place behind elephants, giraffes, zebras and hippos: Zoos across the United States gather, compost and sell their animal waste to homeowners to beautify their gardens and lawns.

“A lot of people tell us their gardens look amazing because of the Zoo Doo,” says Kaitlyn Welzen, recycling and compost coordinator at Woodland Park Zoo in Seattle.

Zoo Doo is the trademarked name for the compost created by the rhinos, elephants and zebras and other animals at Woodland, which is one of the most enthusiastic spreading the word about composted zoo waste.

“It makes perfect sense to compost waste,” Welzen says. “We reduce what goes to the landfill, create a sustainable product that gardeners love and the zoo benefits from the support.”

Not a DIY project

While waste — from hippos or even humans — can be the basis for excellent soils, composting large-animal waste in high volumes is not a DIY project. Removing pathogens requires adhering to strict standards and undergoing rigorous inspections to ensure Zoo Doo and similar products are safe for household use.

That means for most of us, obtaining large-animal compost means grabbing a bag or a bucket during a trip to the zoo.

Many zoos do their doo in some fashion. If you’d like to add the recycled soil as an amendment to your garden, here is a sample of the programs available nationwide.

City: Columbus, Ohio
Zoo: Columbus Zoo and Aquarium
Product: Zoo Brew
Twice a day, the zoo’s waste travels to Price Farms, the zoo’s composting partner. The manure can include otters, bison, pronghorns and droppings from elephants the size of bowling balls. At Price, the material is mixed with other organics, including table scraps from the nearby Ohio Reformatory for Women, and cooks for two years. “This is what our staff and owners use at our own homes,” according to Price’s promotional material.
Cost: Small packages available at the zoo’s gift store. At Price it is $28 per cubic yard; price drops to $23 per cubic yard if you purchase five or more.
How to buy: Visit the zoo or contact Price Farms.

City: Kansas City
Zoo: Kansas City Zoo
Product: Zoo Manoo
The Kansas City Zoo diverts an estimated 75 percent of its animal waste from the landfill, turning it into nutrient-rich Zoo Manoo. The zoo claims the composted dung adds nutrients, retains water and modifies soil temperature, keeping soil cooler in the summer and warmer in the winter. Zoo Manoo is available year-round and sold by the truckload.
Cost: $25 per truckload, or $20 for Friends of the Zoo members.
How to buy: Make an appointment at the zoo for pickup.

City: Miami
Zoo: Zoo Miami
Product: Zoo Doo
In Miami, poo is collected from elephants, rhinos and banteng living at the zoo and added to an industrial composter where its heated to 154 degrees Fahrenheit to kill bacteria. The zoo collects 2,000 pounds of animal waste per day and sells it by the bucket or cubic yard.
Cost: $12.95 for a five-gallon bucket (spring 2019 sale price $9.95). $30 per cubic yard.
How to buy: You can purchase a voucher online and show up at the zoo with 72 hours’ notice (and an empty truck for the cubic yards).

Two years ago, the zoo tired of managing a 15-acre pile of manure and sending it to the landfill. It contracted with Minick Materials, an Oklahoma City landscaping company, to produce OKC Zoo Poo. Some of the material is sold to the public, while some is returned to the zoo’s own garden. The zoo can “use that compost in its 160 acres of botanical gardens while both the zoo and Minick can package the compost into a great product for consumers,” said Lance Swearengin, the Oklahoma City Zoo’s horticultural curator.
Cost: Two sizes are currently available at the zoo during special events: a small bag for $3.99 and a large box with pollinator seeds for $9.99.  It is also available in bulk at $50 per cubic yard from Minick.
How to buy: Contact Minick at (405) 789-2068.

It takes up to six months to compost animal dung. The Woodland Park Zoo uses waste only from nonprimate herbivores for its zoo doo. (Carnivores and primates produce much smellier poo, which is much harder for the neighborhood zoo to store on-site).
Woodland waste from animals such as giraffes, zebras and hippos takes six months to break down. It goes into Zoo Doo, a rich soil amendment for raised beds or a top-dressing on the lawn.
The demand for Zoo Doo led the Woodland Park Zoo to institute a lottery system. The lucky winners can attend a semiannual Fecal Fest event (held in spring and fall) to load up five-gallon buckets or entire pickup trucks full of compost for their gardens.
Cost: In addition to the lottery for the five-gallon containers, zoo visitors can purchase two-gallon containers of Zoo Doo for $20; two-pint containers are $4.95.
How to buy: Go to the zoo’s stores; the two-gallon containers can also be purchased d in the online ZooStore.

Other Uses for Zoo Animal Waste

Other zoos find creative and environmentally friendly ways to deal with their animals’ waste, but do not routinely sell it to the public.

Detroit City Zoo gave out 1,000 buckets of its animals’ poo to lucky residents in 2018, but it is not regularly available. Instead, the zoo runs 500 tons of its animals’ manure each year through a converter to turn the nitrogen-rich droppings into methane gas, which helps power the animal hospital.

At the North Carolina Zoo in Asheboro, N.C., its tons of rhino and elephant manure go into a cycle. The manure is mixed with straw, table scraps from the zoo’s diner and cooked in giant piles into a rich compost. That, in turn, fertilizes the bamboo and other plants the zoo raises for feed — for rhinos and elephants and other manure-creating animals.

They use bulldozers and giant temperature sensors to make compost efficiently and at large scale, but “The beauty of composting is you can hardly go wrong,” says George Adams, the zoo’s horticulture technician and compost operator. “People do it at home and do different techniques but if you just take organic material put it on the ground and don’t touch it, eventually it will turn into compost.”

If the idea of rhinos, giraffes and elephants fertilizing the lawn and garden is not novel enough, cities including Austin, Texas, and Coeur d’Alene, Idaho, have taken the idea to the next level, converting human waste into compost. The idea might seem novel but it dates back centuries when chamber pot contents were called “night soil” and often emptied into gardens outside the back door.

The process is trickier than creating compost from herbivores. Humans consume different material and flush many other items down their toilets that become part of the waste flow. Testing requirements are stiffer for human waste products than on zoo animal compost.

But despite the added hurdles, some are trying:

Check With Your Zoo

The composting efforts listed above represent only a smattering of the zoos in the United States. According to the Association of Zoos and Aquariums, there are more than 2,800 animal exhibitions in the U.S. Check with your local zoo to see if it has a dung deal.