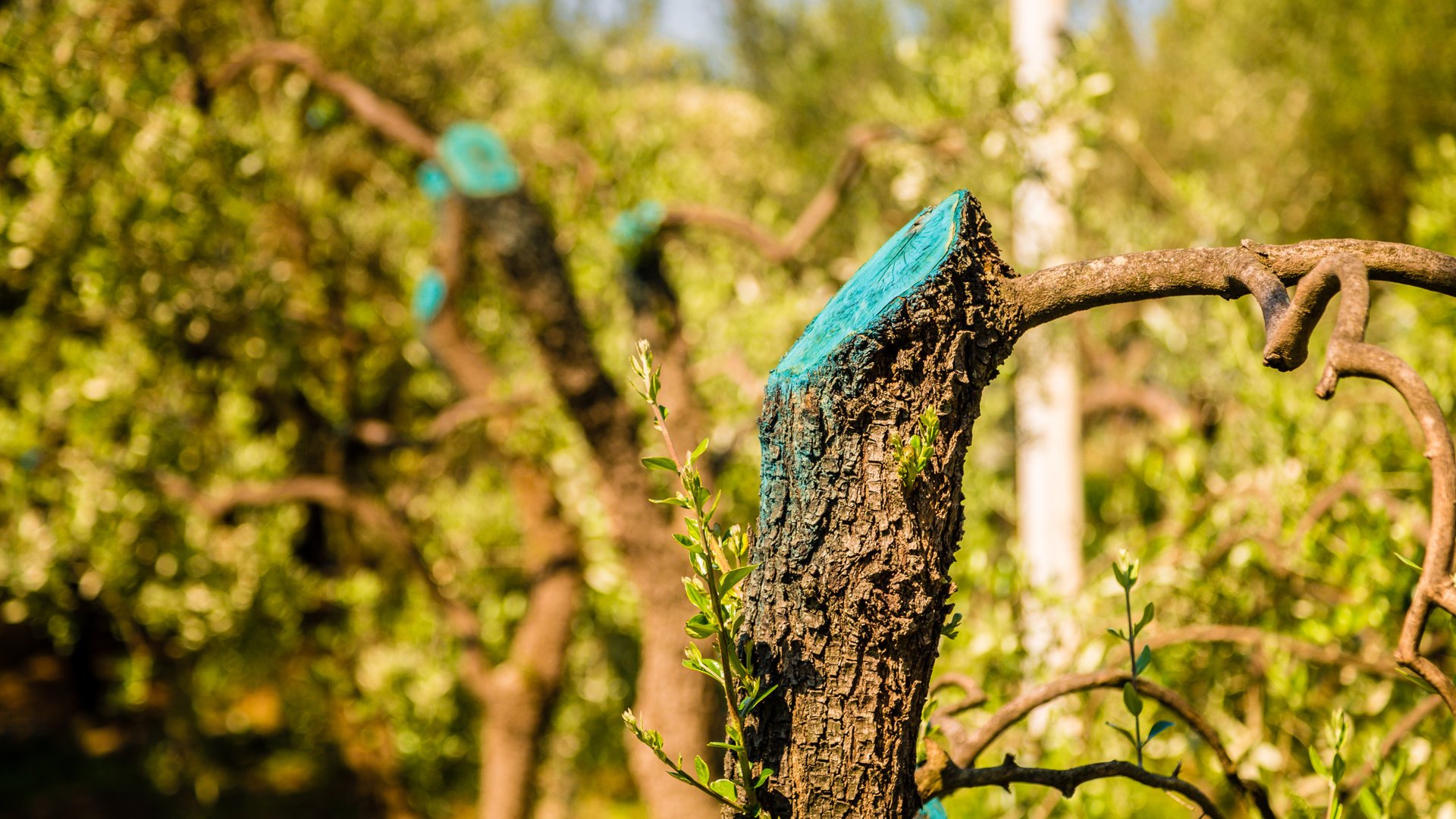 For a long time, it was common practice to use a pruning sealer when trimming trees — a seemingly common-sense practice recommended by trained arborists and nursery workers alike. Generations of homeowners grew up believing that painting on an application of pruning sealer on trees limbs/branches was an integral part of “safe” tree pruning.

So let’s talk about why it’s now considered a gardening myth and how yesterday’s tree bandage became today’s bad practice.

What is tree pruning sealer?

A tree pruning sealer is a specially designed waterproof product that is applied, or “painted,” onto the exposed cut on a limb or branch after pruning. For many, many years — and still to this day in some cases — people were told by an arborist that tree wound had to be covered with a sealant.

A tree pruning sealer is a bandage of sorts meant to cover the wound. Their packaging claims to aid in the healing of pruning cuts, minimize sap loss, and protect trees from decay, insects, and fungi.

It was an easy DIY project, the product was (and still is) in stock at all garden and big box stores, so it became ingrained as a habit for homeowners.

While good in theory, scientific research conducted by Alex Shigo of the U.S. Forest Service in the late 1970s explained that pruning cuts should not be painted. Rather, the tree should be left to heal through its own devices after you prune it. He emphasized the importance of following proper pruning practices. Let a fresh cut heal naturally instead of covering it with a wound dressing, he urged.

Why tree sealant fell from grace

Later studies confirmed Shigo’s work. Today’s arborists are trained to consider sealers a bad practice because they make it harder for trees to recover after pruning.

It’s important to understand that trees don’t really heal after they have been damaged. According to the University of Arizona Cooperative Extension, they instead isolate damage through a process called compartmentalization. Callus tissue develops at the edge of the wound and gradually grows in toward the center. When trees are pruned correctly this new growth eventually covers the pruning wounds, protecting the damaged trees.

These sealant products are typically petroleum-based, although some may contain asphalt — and actually trap moisture inside the tree wound, which may encourage more problems instead of preventing them. Some products exist touting natural ingredients such as collagen, pectin, or aloe vera. Unfortunately, there isn’t any scientific proof that they benefit the tree, either.

The petroleum and asphalt-based wound dressings are known to:

Liked by neither tree nor human

They’re no fun for humans, either.

Thanks to their volatile combination of asphalt and solvent, according to the safety data sheet for one popular product, they:

Wear skin and eye protection, the label advises, and store it in a cool, well-ventilated place.

So after learning those tidbits, it’s a bit easier to see why you should stop using pruning sealer on your trees.

Should you seal pruned limbs at all?

The short answer to this is no! You should not use pruning paint to seal pruned limbs at all. They are better left to undergo natural healing through their own plant defense mechanisms.

Plus, why would you want to put a product on your tree that can also be used to seal and waterproof rain gutters, roof flashings, wooden planters, the underside of a lawn mower deck, or even small sections of asphalt driveways? If something claims to be effective for these other outdoor uses, don’t put it on a living tree. In my opinion, it’s better to leave the tree be so it can “fix” itself.

Instead of sealing pruning wounds it’s better to implement prevention. You can minimize problems that may stem from pruning by following these tips:

Oak trees in about 24 states, from the middle Eastern states south through Texas, can suffer from oak wilt. The damage done can be both devastating and irreversible. The fungus that causes the disease spreads from tree to tree, carried by Nitidulid beetles attracted to the smell of the tree’s sap. The insects will then move to another tree, laden with oak wilt fungus spores, and spread the disease. So quickly covering any pruned branches will cover that fresh-sap smell before the beetles come a-running.

“Most forms of paint work equally well, and there is no need for specialized rubberized or petroleum sealants,” says Texas A&M’s Flocke. He’s stationed in Austin, Texas, where oak tree wilt is such a concern that pruning oaks is discouraged from February through June. “The wound paint is only necessary for the first two to four days after the cut has been made,” Flocke says, “so there is no need to reapply paint or to go out and paint old wounds.”

How to remove pruning sealer

I’m sure you’re now asking yourself if using a pruning sealer has caused irreparable damage to your trees. You may also wonder if you should consider removing it. This isn’t so easy to answer and surprisingly there isn’t much discussion about it online.

I recommend if your trees’ pruning cuts had sealer applied to them, remove it if possible. Due to the chemical composition of the sealer, you can’t simply peel it off and throw it away, unfortunately.

The best way to remove pruning sealer would be to make a new pruning cut on the branch. Remove the paint, and create a new, open wound. A new pruning cut wouldn’t need to be made much below the old one. Perhaps a quarter to a half of an inch is good if there’s enough wood to do that. Make sure it’s a clean, straight cut and your tools are sterilized.

This new wound will trigger the tree to begin the process of compartmentalization, forming a new callus to protect the wound naturally.