When Will the Population of Dallas Reach 1.5 Million? Seven years from now, though, the population of Dallas is projected to surpass 1.5 million, according to a data analysis prepared by LawnStarter’s research team. There’s no telling where Dallas will rank among the country’s largest cities in 2024. But if Big D were at 1.5 million today, it would be the seventh largest city in the U.S. -- just ahead of San Antonio, TX, and just behind Phoenix, AZ.


To calculate our population projection for Dallas, we examined the city’s annual population growth rates for 2010 through 2015. The population data comes from the U.S. Census Bureau. For the 2010-2015 period, we arrived at an average annual growth rate of 1.65 percent.

Taking into account the 1.65 percent growth rate, we predicted when the population of Dallas will ascend to 1.5 million. Our formula shows the city will be home to 1,506,389 residents in 2024.

See the graphic below for a look at the population growth trajectory of Dallas.

When told of LawnStarter’s forecast, Luis Tamayo, chief planner for the City of Dallas, said it’s “safe to expect” the population of Dallas will reach 1.5 million by 2024.

“In recent years, the city of Dallas has witnessed a booming economy, which has been one of the most major population growth drivers,” Tamayo says. 
The combo of job and population growth in Dallas shows no signs of letting up. Tamayo says the “diverse economy” of Dallas is supporting corporate expansion and relocation, retail, hospitality, residential and commercial real estate, and other sectors. For example, Dallas built more apartments than any other city in the Dallas-Fort Worth area from 2015 to 2016, accounting for 40 percent of all new apartments in the region, according to Tamayo.

A prime example of Dallas’ status as a job and people magnet: Jacobs Engineering Group, a Fortune 500 company, moved its headquarters in 2016 from Pasadena, CA, to Dallas.

“I have no doubt this relocation will help attract a number of smart, young individuals to live and work in our city,” Dallas Mayor Mike Rawlings said when the Jacobs move was announced. 5 Tips for Watering Your Dallas Lawn

Dallas-Fort Worth’s New Residents: Where Do They Come From? 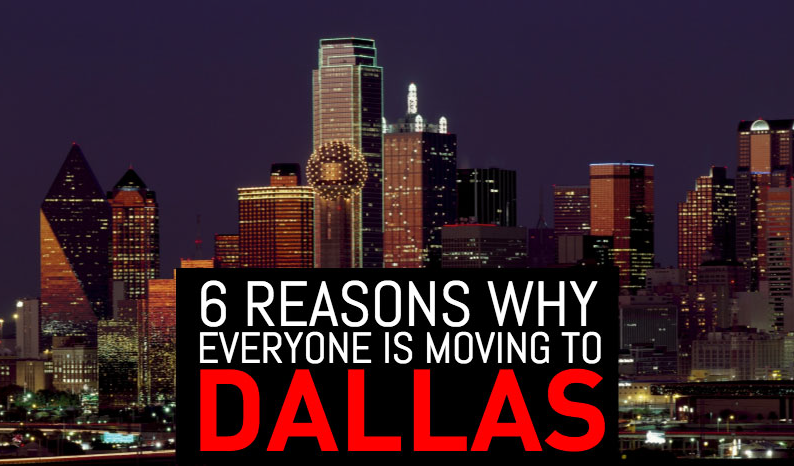 6 Reasons Why Everyone Is Moving To Dallas Texas