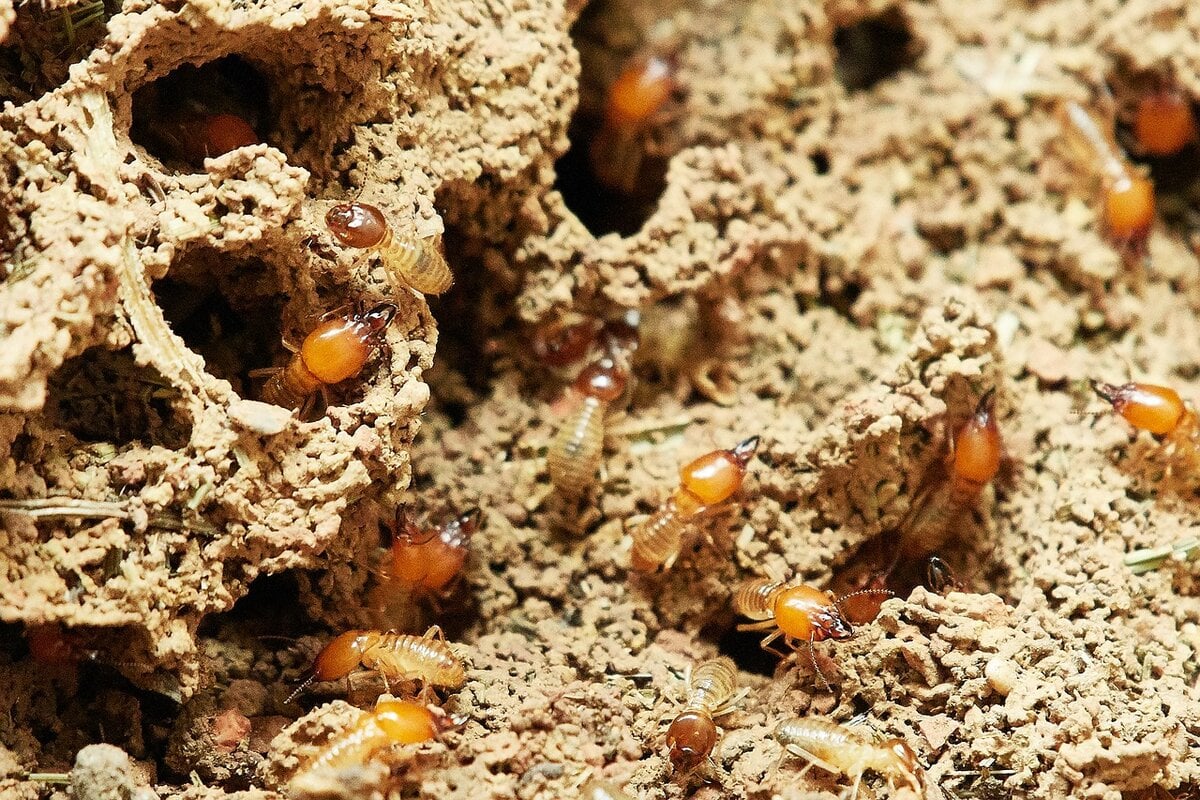 That winged bug you saw by the windowsill this morning that you thought was a flying ant? Think again. Chances are good that it is a termite.

Signs of termites include left-behind wings, swarming termites, fecal pellets, and small holes in the wood.

If you’ve seen signs of termites or think your home may have termites, you need to know which type of termite you are battling.

There are approximately 45 different species of termites found in the U.S., and about 2,500 species worldwide, each of which falls into one of the three main termite types.

Here are the three main types of termites:

Knowing the appearance, behavior, and signs of damage of these three types of termites can help you catch the infestation early, saving on the cost of repairs to your home.

Subterranean termites have existed for over 55 million years. The alates, or swarmers, are dark-brown to black, about ¼- to 1/2-inch long, and have two pairs of almost equal wings. The workers have no wings, are cream-colored and are about 1/4-inch or less in length.

According to Orkin pest control, subterranean termites exist in every state except Alaska. They prefer the warm southern states and are most common in Florida and Southern California.

Subterranean termites need moist conditions to survive, which is why they live in the soil and not the wood they infest.

When termites forage above ground for their food source, they must ensure a connection to the soil that allows them to return to ground and replenish moisture. This connection is created by mud tubes that act as a passageway between the soil and woody food.

According to the Virginia Cooperative Extension, the worker termites will actively repair a damaged mud tube. Otherwise, termites located above ground will die of dehydration.

These moisture-loving termites occasionally may establish the colony above ground. Living above ground usually occurs when a wooden feature is experiencing moisture problems caused by leaking pipes or poor ventilation.

Not only do subterranean termites create mud passageways that connect their food source to the soil, but these mud tubes are also protective. Called exploratory tubes, these connections (also made of fecal matter) protect the termites from predatory ants as they forage food.

These exploratory tubes are easy to see and can be a significant sign of a termite infestation. Once the termites locate a food source, they create larger tubes, called utility or working tubes, to lead termites from the tunnel galleries to the food source.

It takes several months or years of feeding for subterranean termites to cause significant damage. These termites will typically feed on the soft grain of the wood, following the grain. They leave behind the hard grain and a thin outer layer, making an infested wood structure look perfectly normal on the outside.

You can recognize subterranean termite damage by the fecal-soil mixture brought into the tunnels to ensure humidity. Without this soil mixture, the termites would dry out and die.

These termites invade the home from the soil around and beneath the vulnerable structure. Subterranean termites also may enter the home through cracks or crevices created by plumbing or electrical lines.

Drywood termites are most commonly found in the coastal southern states from North Carolina through the Gulf Coast, and along the coast areas of California.

There are usually a few thousand termites in a drywood colony, which develops slowly. While most colonies remain small, multiple colonies can infest the same wood structure.

The swarmers can be up to 12 mm long, are reddish-brown, and have two sets of wings. The front set has a pattern of heavy veins in the outer part of the wing. The swarmers shed their wings very quickly, so most dead swarmers do not have wings attached.

Dead subterranean termite swarmers will typically consist of bodies with and without attached wings.

Unlike subterranean termites that produce liquid feces, drywood termites produce dry fecal pellets. The termites dispose of the pellets through “kick holes” or “kick-out” holes to keep any pellet accumulation outside the gallery.

Pellets forming outside of the kick hole is typically the first sign of a drywood termite infestation.

Drywood termites do not need to maintain contact with the soil for moisture. They extract enough water from feeding on wood and produce water during the digestive process. According to the Arizona Cooperative Extension, these termites prefer wood with 10% moisture content but require as little as 2.5% to 3% moisture.

Unlike subterranean termites, drywood termites eat both across and with the grain of the wood. They make clean, smooth gallery tunnels with few fecal pellets and no soil. Infested wood will contain the round kick holes through which the termites eliminate their fecal pellets.

Keep in mind these fecal pellets may accumulate outside the infested area. The pellets are hard, elongated, and less than 1-mm long. They have rounded ends and have six flat sides (though this can be difficult to see without aid). The pellets are typically tan in color, though occasionally black.

Dampwood termites are typically brown, but can range from dark to light and can also be reddish. Nymphs are cream-colored and can grow up to 5/8-inch long.

These termites are most commonly found in the western states, including California, Idaho, Montana, Nevada, Oregon, and Washington.

Finding a dampwood termite infestation is challenging. These termites keep themselves well hidden and typically cause significant damage by the time they’re discovered. They don’t build mud tunnels like subterranean termites, and they don’t create visible holes in the wood to eliminate their fecal matter like drywood termites.

To stay relatively unseen, dampwood termites need to ensure they have enough moisture. To that end, these crafty termites plug any holes with their fecal matter to keep from drying out.

While subterranean termites depend on soil to replenish moisture, dampwood termites depend on moist wood. Soil is unnecessary for this termite to survive, though contact between soil and a wooden structure often leads to infestation.

Wood that is water-damaged or rests directly on the ground is attractive to dampwood termites, particularly stumps, lumber, logs, or tree branches. Roof and pipe leaks may lead to water-damaged wood in your home, which attracts these pests.

Tunnel galleries often contain fecal pellets, though no soil. The pellets can appear stuck to the sides of the galleries, forming clumps. Yet if conditions are dry, the pellets will collect at the bottom of the galleries.

When swarmers of dampwood termites are visible, their presence is typically a good indication of an infestation.

Contact between wood and soil will often lead to a dampwood termite infestation. Wood that has been damaged by leaky pipes or poor ventilation also attract these termites.

Keeping rain-soaked firewood near the home? These termites will infest that too. Dampwood termites live in the wood they feast upon and can eventually invade sound (even dry) wood.

Forgot to clean the gutters like your spouse asked you to do? Gutters filled with debris can cause excessive moisture to accumulate in wall cavities, attracting these hungry termites.

When to call a pest control professional

Call a pest control provider near you if you suspect your home may have a termite infestation. Termite damage can break the bank if ignored for too long. It’s best not to wait to deal with an infestation.

Even if you don’t suspect an infestation, it’s smart to schedule a routine termite inspection with your pest control company.

Why? Termites know how to remain hidden, and often you won’t know your house has a termite problem until it’s too late.