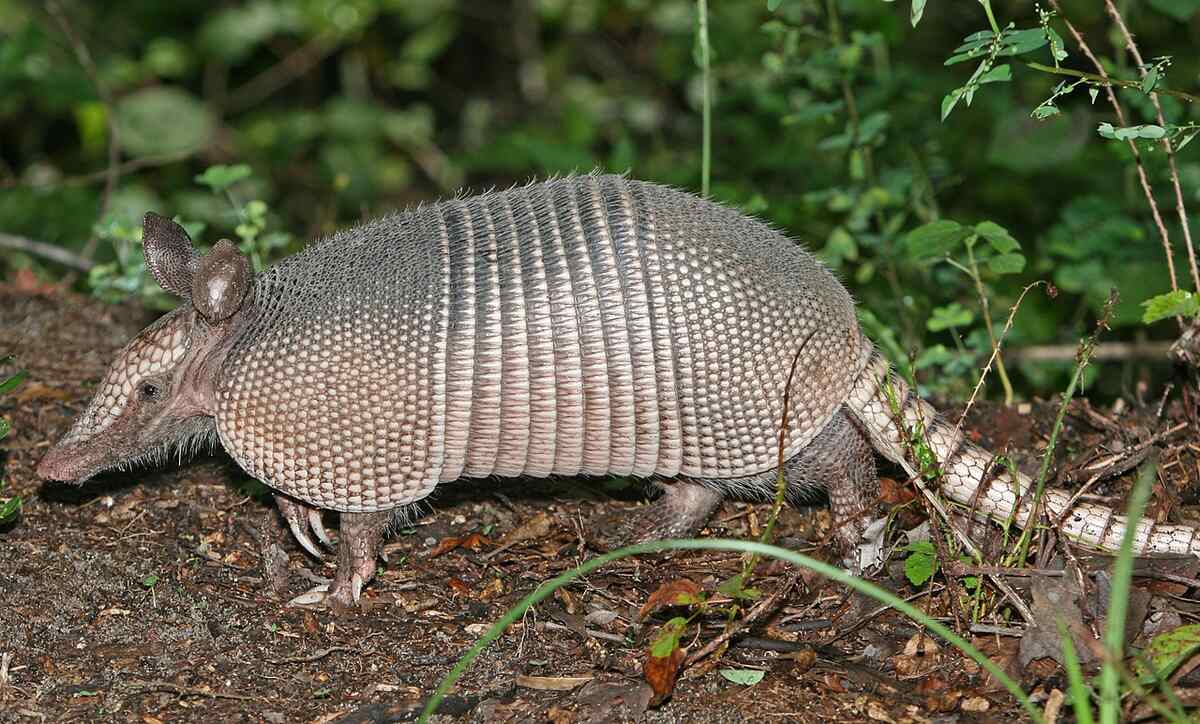 Don’t let an armadillo’s small size, big ears, and cute snout fool you. The nine-banded armadillo causes  considerable damage to lawns, flower beds, and vegetable gardens. We’ve collected five humane ways for you to get rid of armadillos while protecting your property and the animal’s life.

How to Get Rid of Armadillos

You can control armadillos on your property by limiting their access to food and hiding spots, installing fencing, or trapping them.

Termites, grubs, and other insects, plus soft fruits and vegetables, are an armadillo’s favorite meal. Reduce their food sources in your yard to make it less inviting.

Cons of restricting food supply: Armadillos, denied a ready supply of food from the ground, may scavenge your yard for anything else to eat.

An in-ground fence, usually made of wire, acts as a physical barrier against advancing armadillos.

The underground fencing needs to be deep because armadillos dig. Bury 12 to 18 inches of the fence into the ground with 1 foot of fencing above ground to keep them from climbing over. The fencing needs to bend outward at a 40-degree angle or in an “L” shape to deter the critters.

You don’t have to tear down your existing fence to add an in-ground layer. Two options for installing an underground fence are:

Cons of in-ground fencing:  While it’s an effective solution, it has drawbacks.

Homeowners with a large lot will want to consider the cost of fencing materials.

An electrical fence can keep armadillos out of your midst and off your grass, but don’t go this route in areas where children or pets play.

The University of Missouri Extension recommends placing a single, 3 to 4-inch high strand supported by posts approximately a foot away from your fence to keep armadillos at bay.

To begin with, confirm that electric fences are allowed in your area by contacting your city or county. Due to safety concerns, several towns forbid the usage of electric barriers.

The components and kits to DIY install an electric pest fence are readily available to buy and fairly easy to install. It works on a lower amperage than the electric fences for livestock, which will shock but not kill your pets.

Cons of an electric fence:

You can install an electric fence in a few hours or less to provide basic animal control.

Pro Tip: One of the most significant issues with electric fencing systems is poor grounding. Make sure your connections are good when installing.

Armadillos like to create burrows in areas that have a protective cover and will dig several more for escape routes.

Check your property for armadillo burrows and holes near:

Check your state’s wildlife laws to see if it’s legal to catch and release armadillos in your area.

Trapping is an effective way to control armadillos in your yard. Look for a cage trap with these characteristics:

The challenge with baiting armadillos is getting an armadillo to find the trap and enter it. Armadillos struggle to recognize food sources until they are up close. Baiting an armadillo from a long distance will not be a successful solution.

The University of Florida Extension concluded that most armadillos preferred:

These are all available online or at your local pet supply store. Place live bait in a nylon stocking so they won’t escape before the armadillo gets there. If worms and crickets make your skin crawl, the Alabama Cooperative Extension notes that “live traps baited with overripe fruit, such as apples or bananas, can be used to catch problem armadillos,” too.

You need to check the armadillo traps every morning. Animals trapped in cages or live traps should never be left alone for any extended time.

Cons of trapping with bait:

It’s best to contact your local professional wildlife control service to relocate any wild animals. If panicked, an armadillo may use its extremely sharp claws to get away, which can lead to serious injury. If you choose to transport the armadillo yourself, always wear gloves. Heavy-duty gardening gloves or thick gloves with long cuffs are best.

SEE RELATED: How to Get Rid of Voles

How to Prevent Armadillos

Once you’ve sent the trespassing armadillo on its way, you’ll need to cover those burrows to keep another armadillo from moving in.

Start by gently blocking the entrance to the burrow, and then watch it regularly to avoid trapping the animal underground. Watch to see if it has returned to re-open the tunnel.

After a few days of no visible disturbance, you can fill in the hole with a mixture of dirt and pea gravel. This makes it more difficult for them to dig through again.

If you had an armadillo under your house and you’re confident it is no longer there, bury an L-shaped length of the in-ground fencing against the foundation. This prevents animals like armadillos from digging back under.

Armadillo Problems: What To Look For

Armadillos typically dig up lawns to munch on grubs and earthworms. Although they do not eat plants directly, their digging may damage or kill your grass or gardens.

Signs of armadillo damage include:

You might be dealing with gophers, woodchucks, or moles if there are piles of dirt near the holes.

Armadillos are mammals that have protective armor covering their barrel-shaped bodies. Its name translates to “little armored one” in Spanish.

Out of the 20 or so species of armadillos that exist, only the nine-banded armadillo lives in the U.S. Florida classifies armadillos as an invasive species.

Armadillos resemble their distant cousins, the anteaters, in that they both have long, sticky tongues and pointy snouts. Armadillos come in a variety of colors including red, gray, black, yellow, and even pink.

Armadillos range in size from the pink fairy armadillo at 3 inches long to the giant armadillo, which may be up to 5 feet long and weigh around 132 pounds.

The back, head, legs, and tail of an armadillo have overlapping plates. According to the San Diego Zoo, the number of armored bands identifies each species.

What do Armadillos Do?

Armadillos are solitary creatures who spend most of their time asleep. According to National Geographic, they can sleep up to 16 hours a day. They forage for food in the early morning and evening hours.

Because of their poor eyesight, they hunt using their highly developed sense of smell and have wiry hairs along their sides and belly to help them navigate. An armadillo’s primary diet is insects and other invertebrates, but they also eat fruit, eggs, small mammals, and carrion.

According to the CDC, some armadillos in the southern United States are naturally infected with the bacteria for leprosy that results in Hansen’s disease in humans. However, the danger is extremely low, and most humans who do encounter armadillos are unlikely to contract an illness.

Can You Flood an Armadillo Out of its Burrow?

It’s not recommended. When using water to flood a burrow, you risk damaging nearby structures, including your home. It might cause mold problems, shaky ground in the yard, cracks in pavement and sidewalks, damage to your home’s foundation, and flooding in basements.

Are Armadillos an Endangered Species?

Armadillos are not endangered, according to the International Union for Conservation of Nature (IUCN). However, the giant armadillo has been listed as “vulnerable,” and the southern three-banded armadillo is listed as “near threatened” because of population decline.

When to Call Professional Help

Ridding your lawn of armadillos takes dedication, perseverance, and a real desire to keep these diggers off your grass. If the above solutions don’t run off your armadillo, call animal control, wildlife removal, or a pest control expert near you.

Raven Wisdom is a screenwriter from West Texas and a proud mom of two in an autism family. Self-described as "half-feral but mostly harmless," Raven loves houseplants, a good laugh, and furry friends.
Posts by Raven Wisdom