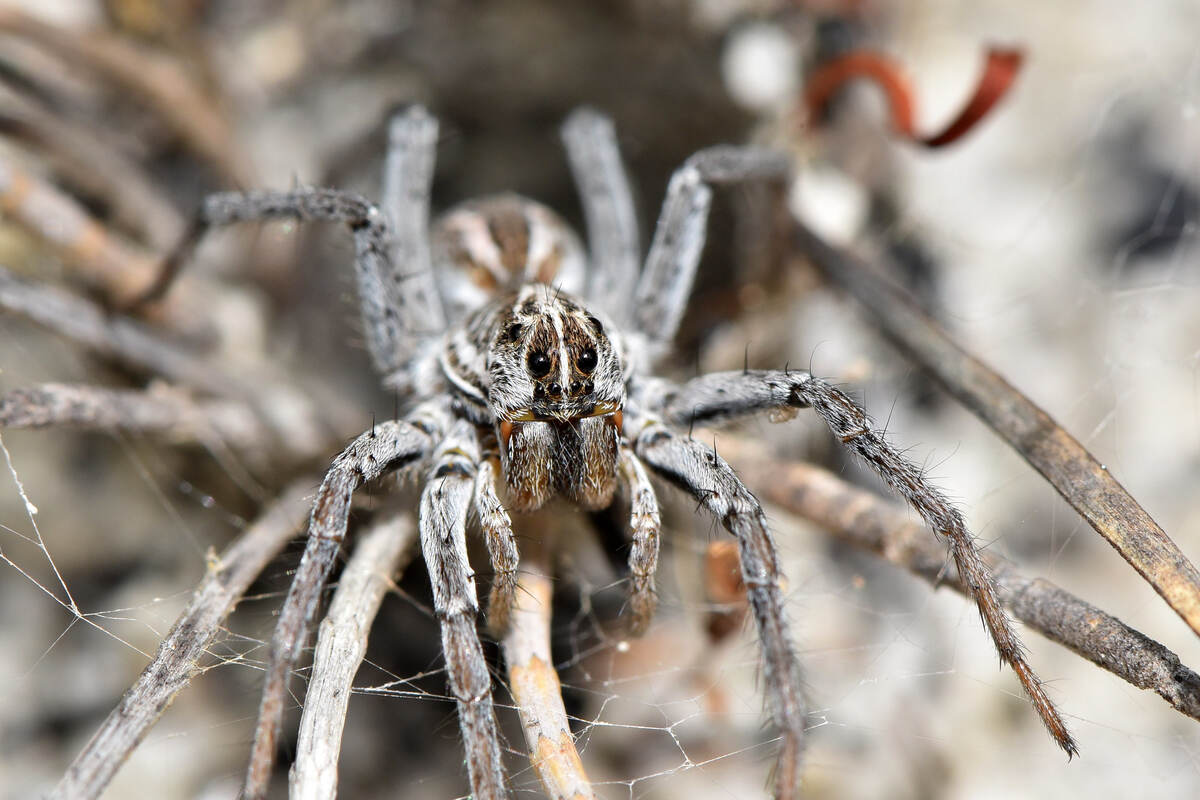 Knowing what types of spiders are found in your home is the best way to put you at ease when you see them or find spider webs. There are seven common types of house spiders you may encounter in and around your home:

Less than an inch in size, American house spiders are brown with yellow (male) or orange (female) legs. They are the most common spider to be found in homes, though they build their nests in out-of-the-way places.

Are American house spiders poisonous? This web-building house spider’s bite is rare and not dangerous to humans.

Note: Although this question is commonly phrased this way, spiders may be venomous but aren’t poisonous. A venomous animal injects venom via a bite or sting; poisons are ingested, inhaled, or enter through your skin.

Body: The abdomen is round, higher than long, usually with streaks on the side and V-shapes behind.

Legs: Often have a ring of dark color

Eyes: Eight eyes, with six facing forward and two on the side

Wolf spiders are brown or gray, hairy creatures that grow half an inch to 2 inches, and prefer to hang out around windows, doorways, basements, garages, and attics. Rather than spin webs, these predators crawl around at night to hunt for food. Wolf spiders are timid and choose the flight over fight response when alarmed.

Are wolf spiders poisonous? They are not poisonous to humans, though because of their size, there can be pain at the site of the bite. Just ice it or spray it.

Body: Athletic spiders that run down their prey

Eyes:  Four large eyes in a row, with four smaller eyes below

Cellar spiders have long legs and short bodies. They dwell inside cellars (obviously), crawl spaces, basements, and similar environments. These arachnids can construct massive spider webs and are only harmful to the insects upon which they prey. Also, they tend to cluster, so you might find a lot of massive webs down in that dark, dank cellar (hence the scary stories).

Are cellar spiders poisonous? It is the plot of many an overwrought story that a spider in the cellar kills with its bite. But in real life, their bite is not harmful to humans.

Legs: Darkened joints that can make them appear to have knobby knees.

Length (not including legs): 1/4 inch

Jumping spiders are outdoor dwellers that mistakenly enter homes at times, but they are not a danger to humans. With very large eyes and flat faces, these gray or black-hued creatures are about the size of a dime and don’t build webs.

Are jumping spiders poisonous? They do have venom in their bites, but very little, and apply it only when threatened. You likely will feel nothing. In worst-case scenarios, the bite of a jumping spider is less severe than a bee sting, but can cause a small welt (perhaps the size of a mosquito bite).

Coloring: Grays, tans, and browns, with flecks of black, white, and red, coloring needed to hide in trees

Body: Flat, with an undulating pattern on the abdomen. Can appear to be fuzzy.

Legs: Move in a jerky gait

Hobo spiders are often mistaken for other types because of their unremarkable looks. Not naturally house spiders, hobos cannot survive for long periods inside. Their bites are not life-threatening to humans, and they’ll only bite if they feel threatened.

Are hobo spiders poisonous? Their venom is not considered toxic to humans according to the Centers for Disease Control and Prevention. Their bite is painless to the point where people likely don’t realize that they have been bitten at all.

Body: Covered with fine, almost clear hairs that appear to be feathery, but can’t be seen without a hand lens or microscope

Length (not including legs): Females are 3/8 – 5/8 inches long, males a little shorter.

Black widows strike fear in the hearts of many, and the red, hourglass-shaped markings of the females make them easy to spot. Even so, like other spiders, black widows want to avoid contact with humans and will bite only if directly threatened. If bitten, seek medical attention immediately, as a black widow’s bites can be dangerous.

Are black widow spiders poisonous? Their venom causes injury, and they have the fangs to deliver it. Black widow bites don’t kill, but do cause intense pain, especially in the abdomen and back, and muscle cramps. The symptoms can last for several days.

Coloring: Glossy, black, with red spots on the abdomen

Legs: 8 legs, black, with bristles on their back legs used to cover their victims with silk

Behind the brown recluse spider’s three pairs of eyes is a violin-shaped marking. Growing up to half an inch in length, this type of spider is found most often in properties near the Mississippi River Valley. Typically, bites from the brown recluse occur when people accidentally come into too-close contact with the spider. If a brown recluse spider bites you, seek prompt medical attention.

Are brown recluse spiders poisonous? A bite will be painless at first, but over two to eight hours the pain will hit. Symptoms include malaise, nausea, headache, and aches and pain in your muscles. A bite will at first have two small puncture wounds with some reddening around them. The outer edge will become redder and the pain will increase. At that point, get medical help.

Body: An oblong abdomen covered with gray hairs. Called “violin spider” because of a patch that looks like one on its head.

Eyes: Three pairs of two eyes each, one in front and two on the sides.

Length (not including legs): 1/4 inch

Spiders Are Arachnids, Not Insects

Commonly mistaken for insects, spiders are actually arachnids. Arachnids are land-dwelling invertebrates that have two body segments, eight legs, and no wings nor antennae.

Of the 45,000 spider species living throughout the world, a little more than 1,000 of them live in the United States.

More beneficial than not, spiders are natural pest controllers that help keep living spaces free of insects, such as roaches, gnats, flies, earwigs, moths, and mosquitoes. Outdoors, they help keep bugs away from garden flowers and crops.

House Spiders And Their Level of Danger

Spiders that are found in the home and their level of threat to humans:

Spider Bites Can Be Dangerous

What to Do If You Are Bitten by a Spider

Experts offer the following advice if you are bitten by a spider:

If you can, bring the spider to the physician’s office. It will help determine which antivenins to use.

What to Do to Keep Spiders Out of the House

Here are the strategies on how to get rid of spiders:

The Cost of Keeping Spiders Out

If you start to see spiders in your home, it might be time to call or click for an exterminator. Pest control pros will likely use a perimeter pesticide around the home to address the problem.

Cost: According to a LawnStarter analysis, professional spider extermination can cost between $150 and $300.

How Long Can a House Spider Live?

Will They Go After Humans?


Spiders try to run, hide, or play dead when threatened. They will bite if you get your hand close enough. Something to remember: They have poor vision, so they often don’t realize a threat, such as a hand reaching to it, until it is too late to do anything but attack.

What Is Good About Spiders?


Spiders feed on insects, often being the most important predator of them in your home or garden. Among the things they eat:

Do All Spiders Make Webs?


Not all spiders build webs, but they do all produce silk, which they use to:

● Climb: In every direction

● Encase: They wrap their prey it

● Prevent: Attach themselves to prevent a fall

Now that you know what a few of the most common house spiders look like, remember that if you avoid contact and don’t surprise them, you really have nothing to worry about. They may be scary, but they are usually harmless unless threatened. If you are worried, swat it.

However, should you have a venomous spider, such as a black widow or a brown recluse, or should you have a lot of spiders, you need to take action. Call a professional exterminator, or undertake a DIY project. But they won’t go away on their own.

Disclaimer: This information is for educational purposes only. Consider consulting a professional for assistance if you encounter house spiders in your home or believe you have been bitten by one.